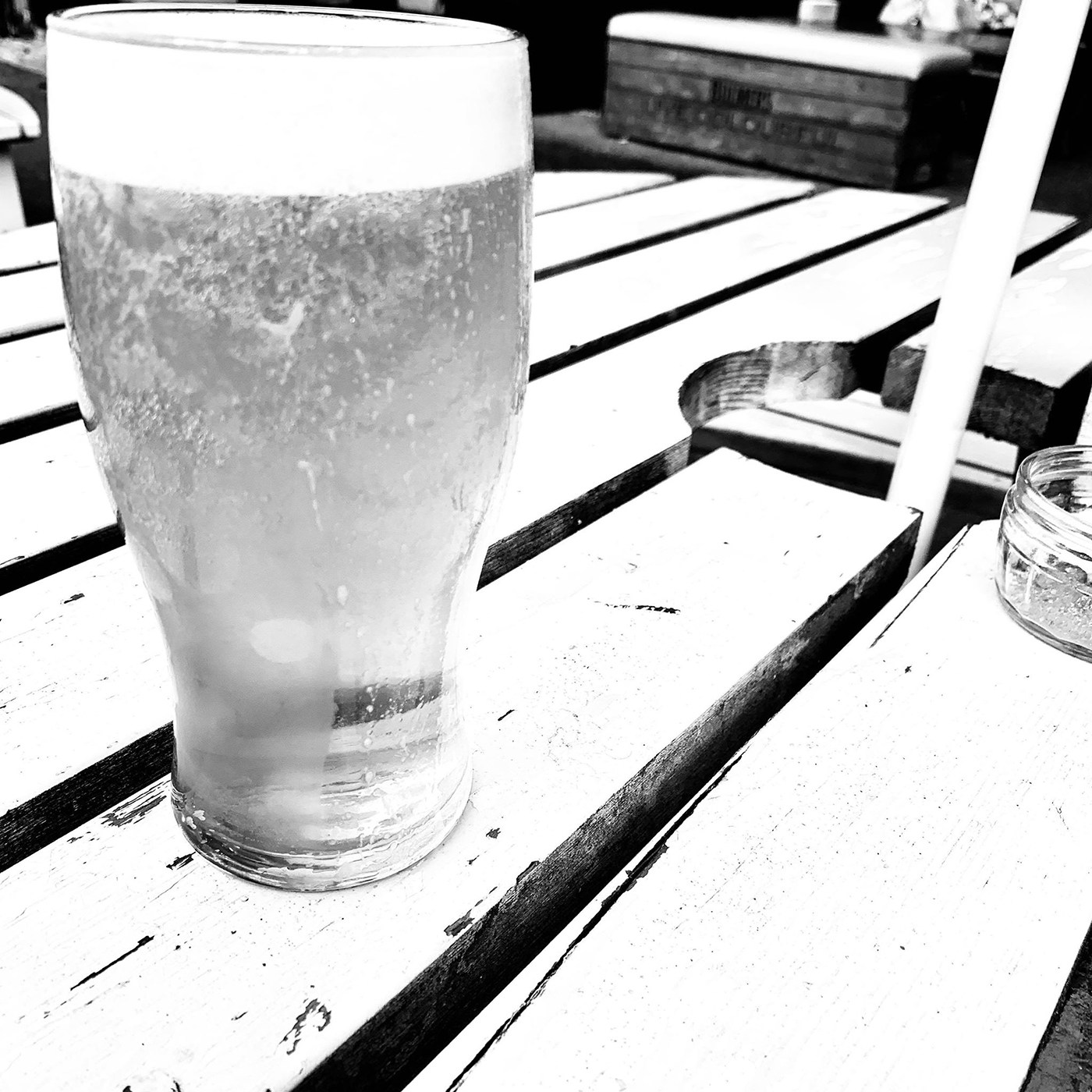 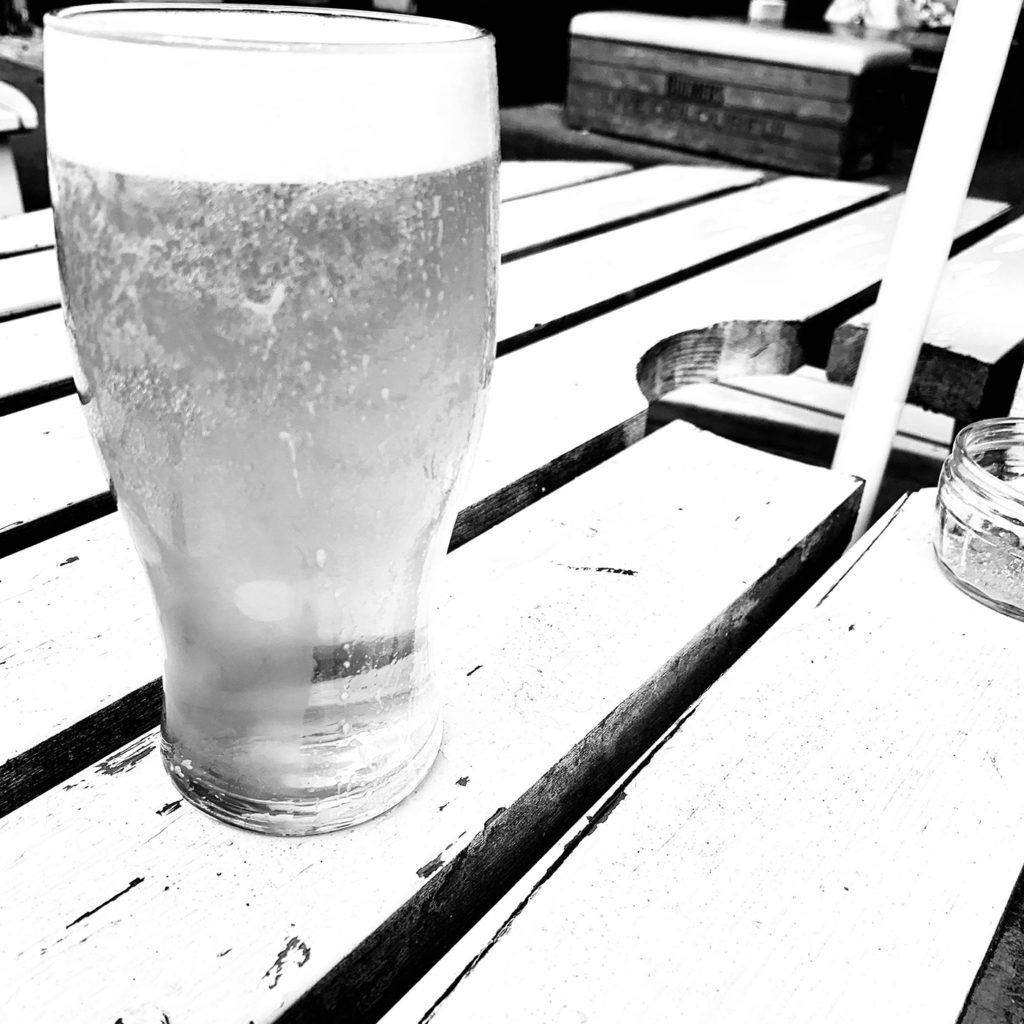 After the cider, we headed into town. The sky was a dark, inky blue, at the very last stage of twilight.

It was a nice night, warm for late April, and we walked along smoking and chatting. There were a few stars out and I thought about the vastness of space and how remote everything was.

John passed me the bottle and I unscrewed the cap and took a swig. It wasn’t bad considering it was proper cheapo, but I have a taste for red wine, anyway – even if it’s pretty bad.

We were meant to be meeting our mate Chris at the Old Brewery at ten, but since he was usually late I figured it’d be more like eleven.

Over in the square, there were two riot vans and loads of people milling about. You used to be able to get away with a lot more round there before they built the strip, which was a bunch of chain pubs all stuck together like a row of shops in a precinct. They did it to centralise everything, but all it really did was cause more kick-offs because everyone was crammed together in one place and you ended up having to wait around for about an hour to get a taxi unless you left before two. The place was swarming with police every Friday and Saturday night because of all the fighting, and you couldn’t drink openly in the street or skin up or have a piss or cause any harmless mischief without a good chance of ending up in the cells for the night.

“Yeah, I know.” I replied. It was a bit depressing.

We reminisced all the way up Town Hall Street, and across to the Brewery.

When we got there, Chris was sat in one of the booths with his cousin Smithy, and Rob, the wreckhead kid we’d been discussing earlier on. They were all drinking pints of lager and laughing.

The Old Brewery opened around the same time as the first pubs opened on the strip and it was essentially a pool club that put bands on and let kids in during the day and for events. It wasn’t a bad place. The owner was a really spot on guy, and he’d made somewhere for young people to hang around and put gigs on and stuff. I organised parties there myself with a couple of mates – all-ages nights with bands upstairs and DJs downstairs. For what they were they weren’t bad. The music scene was quite weird round there – I mean, it was surprisingly good. You’d sort of think it wouldn’t be, because the town was such a depressing, dead-end of nowhere place, but then maybe that’s what inspires people, because forty miles up the road you had Castle Thornton, which had a proper university and city status, and there was practically no scene there at all. Back home, however, if you know where to look, you’d find loads of different little scenes, all based around different types of music, and all surprisingly fresh, sometimes even ahead of their time.

As soon as we walked into the Brewery, Rob came running up to us and gave me a hug that nearly floored me.

I asked if he wanted a drink, but he already had one, and then I went to the bar to get pints for me and John.

“You guys look fucked” said Jack, the barman, as he reached down for the glasses.

I wasn’t, and he always said that to me. I think he just expected us to be fucked all the time. Fair play, really.

“I’m not, actually.” I said, laughing. I was hoping that I would be soon.

I took the drinks over to the booth and sat down next to Chris.

“I haven’t got that tenner I owe you” said Rob, leaning across him, “I’m sorry mate.”

“Don’t worry about it.” I said. Rob always owed me a tenner and he never had it. If I added up all the tenners I’d lent him and never got back, he’d probably owe me about six grand. If I’d cared, I would have stopped lending him money long before, but I never minded with Rob because he didn’t expect it, or at least if he did, he didn’t demand it, or try and steal it off you, or pretend he’d given you it back and you’d forgotten. In fact, he didn’t even try to pretend that he’d ever be able to give you it back.

“I had a weird dream about you asking me if you could borrow a tenner” said Chris to him.

“You turned up at my house in a dressing gown and slippers and asked if you could borrow a tenner to get some groceries.”

“He actually used the word groceries.” said Chris, turning to me. “That’s how I knew it was a dream.”

“Dude, that wasn’t a dream.” said Rob. “That actually happened. I came round this morning. I wanted some ham and mustard sandwiches.”

“WHAT?!?” demanded John, who’d evidently just tuned into the conversation. “You went round to his house because you wanted food?”

“No,” I explained, “He wanted to borrow the money for food.”

“Oh, RIGHT!” said John. “I was going to say. If I wanted food, I don’t think your house is the first place I’d go, Chris. No offence, like.”

“He went round in his dressing gown.” I told John.

Rob nodded, looking proud of himself. “And slippers” he added.

After that, we sorted out the drugs. I always sorted the garys and Chris sorted the charge. You had to do what you had to do. Half the people I knew back then had got involved with dealing on some level. It wasn’t because I didn’t want to work. At one point I had four part time jobs. It just wasn’t cheap supporting yourself and going to college, even with the extra funding you got because you weren’t living with parents.

Generally, we tended not to bother being that sly in the Brewery because they pretty much knew what we were up to, but a couple of weeks before, some random guy had kicked up a fuss complaining about Chris and Rob doing coke in the toilets, so we had to be careful.

We started on a few games of pool after that. Things went fairly well until Smithy and Rob both thought they were yellow for half a game and nobody noticed. After that we just collapsed in hysterics and gave up the pool table to an old punk guy and Matty Thomas, a kid I used to go to school with. That seemed like a long time ago.