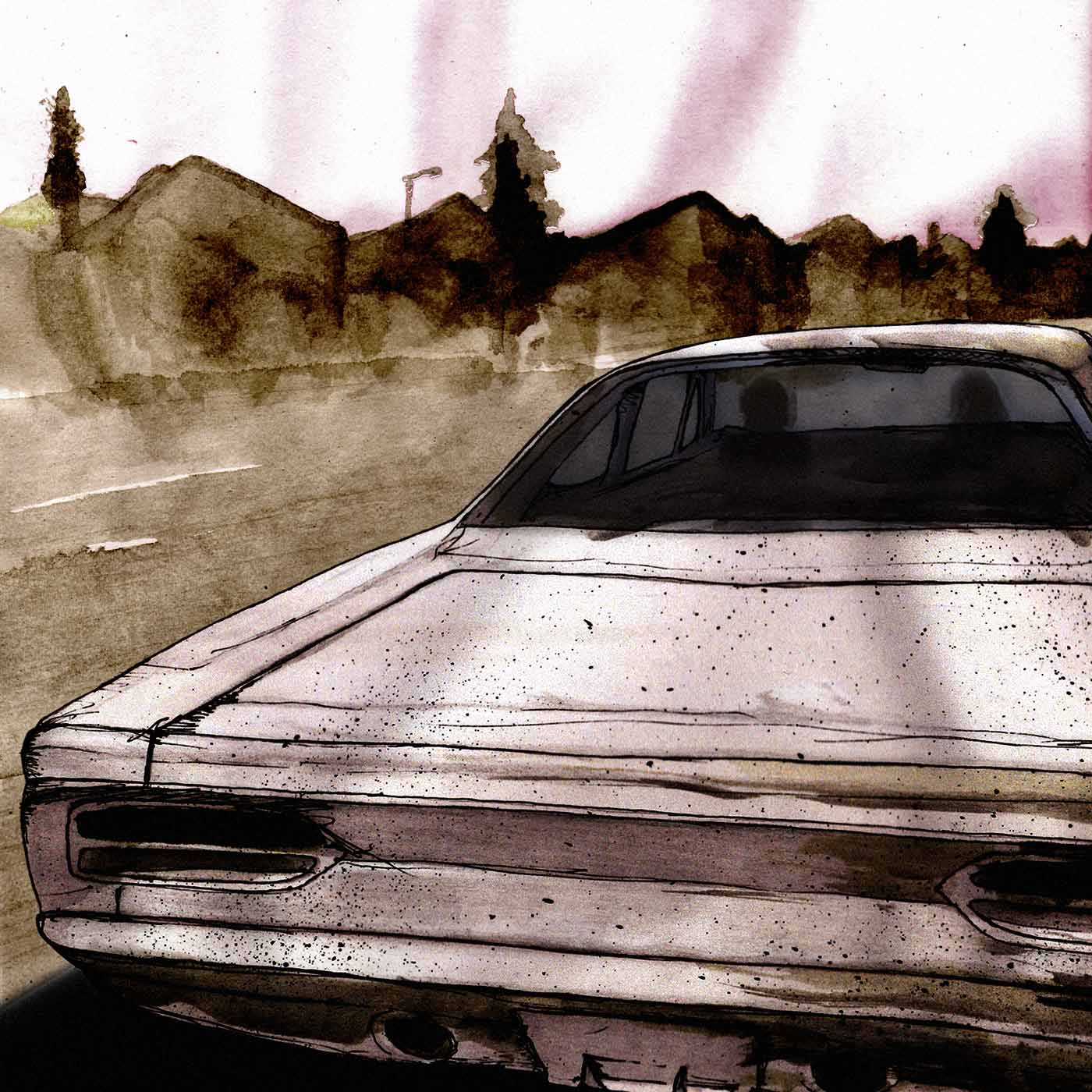 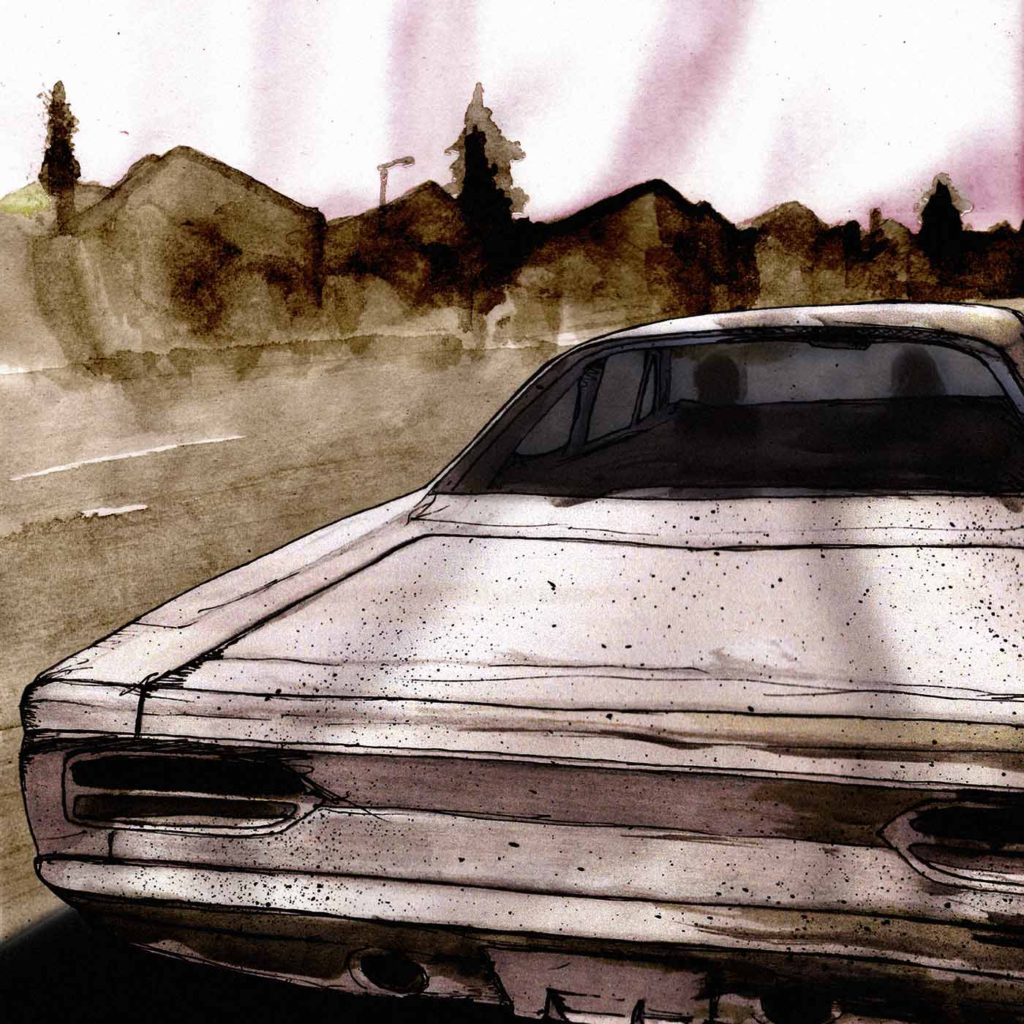 That’s what the metre says.

Dust lays on the windscreen in a thin, ochre film, tiny dunes gathering around the wiper arms. My eyes itch.

A piece of green card shaped like a fur tree swings from the rear-view mirror, tapping gently against the driver’s ID card.

I wince as the clock flicks to seventy-four, then wince again at my unnecessary reaction to its arbitrary LED readout; who the fuck would I pay for this journey anyway? The driver bailed out miles ago, and I’ve been freewheeling ever since.

He was a nice guy too, I really kind of liked him. Not to be friends with or even really to see again, but I sort of wish he had stayed awhile longer. Family man at heart. No kids, but definitely a family man, you can always tell. They work crumby jobs and have long-suffering partners who are too good for them but love them so much they’re cool to hang around for a few years while the guy gets his shit together.

But he never does.

She aspires. So does he, but he enjoys driving taxis and the freedom it brings. He wants peace. She wants security.

Eventually they will have no contact at all with each other, but this only ever comes after a turning point moment.

I glance at the ID card.

Yeah, Ralph sure had his turning point, several miles ago in fact.

“Where too, mate”, he had asked as I piled hastily into his car to escape freshly opened heavens.

Not really an original introductory line, but he seemed decent enough, so I went along with it anyway.

“Journey’s a journey, mate. Whatever the customer wants, right?”

Sounded exactly right to me.

“OK, so I want you to head towards Norwich. The place I’m going is just on the outskirts; I’ll direct when we get nearby”

Silence hugged us like twins in the womb and I hung there afloat in its dense waters. Dusk had become dark and the streets were dressed in their regular evening attire; that iridescent orange setting the rain aflame. I saw those little droplets turn to embers and descend upon us, safe in our strong German car.

“Are you a family man, Ralph?”

He hadn’t given me his name and I hadn’t asked. ID cards negate the need for such niceties and in any case, I enjoy the very English discomfort my directness usually invokes. Today your name is Ralph. Tomorrow you may decide to change that. But if I meet you tomorrow instead of today, you’ll still be more or less the same person.

“Eh?” He fell from his daydream to consider my question; a sentimental crease appearing around kind eyes.

“Well, it’s never the right time to have kids, Ralph”

“I’ve no idea, but I’ve heard it said. I have no children, but apparently there’s never a good time. Makes you wonder why anyone bothers”

I cracked the passenger window slightly and pushed my face outwards to greet the fine mist sweeping in, perhaps as an Edwardian lady would have braced before her atomiser; eyes softly closed, loose lids, slightly pursed lips.

“We’ve talked about it, like, me and the missus” Ralph clearly seemed to know why people bothered. “But it ain’t the right time. She doesn’t want her kids to have an absent dad, and if there’s one thing a taxi driver is its absent”. His head twitched to the left and down, like he’d heard chatter in an earpiece I wasn’t aware of, then gazed a moment at his ringless hand clutching the gearstick.

“You’re not sure she loves you?”, I asked, already knowing.

Something caught his eye up and to the right, though I saw nothing.

“…she definitely used to. But then, we hardly see each other these days and… It’s difficult to know…”

His mouth stopped, seemingly to suck back this half-formed sentence, and he glanced across at me.

“Ah but what am I on about, you don’t know me, you don’t need to know my worries; you’re a stranger to me, I shouldn’t bother you…”

“Ralph”, I said his name as I felt perhaps his mother used to; soft, comforting; I might as well have added ‘deary’ at the end. “Ralph, were you to seek the services of a psychotherapist, that person would also be a stranger to you”

I breathed in that sweet, cooling rain and held it a moment in my lungs. Then turning to face Ralph, I told him straight.

“Sometimes a stranger is just what you need”

That was several miles ago, back in the darkness of yesterday’s slumber. Today was awaking to exalt me with its warmth and I embraced it with a familiar melancholy; the fabled prodigal and his tearful father.

Here I was, freewheeling again. Ralph was gone and that was sad, but now it’s just me, a strong German car and a mostly vacant motorway.

I look at the family man’s face, immortalised on the rectangle of plastic swinging before me like a convict at the gallows. Reaching over, I slide the card from its case and slip it into my bag in the passenger footwell.

You’re with the others now, Ralph. And you’ll be safe there. Safe, content, and away from the sadness.